Battle for the Soul of America... 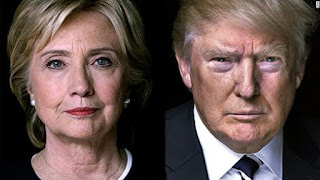 So, the fat lady is on the stage.  She hasn’t started singing yet therefore there is still time to change the tide but I have to say that things are looking super scary!

Yes there he is – Trump in all his glory firing up the people of the United States of America with his fear mongering and bigotry.  I don’t usually watch any of the convention things – I am Canadian after all – but this year I have watched some and followed in the news and I have felt like a person watching a horror/comedy never sure whether I should laugh out loud at the outrageous things he utters or to shield my eyes with my hands.

It has however opened my eyes to so many issues and I worry for my partner and friends in the US.  Racism, inequality, violence, fear and disillusionment are everywhere and people are tired.  Tired of lies and being held hostage by the world they live in. They, just like us wish to have a nice stable life without fear, guns and anger.  Is this what he will bring in should he be elected?  I really don’t know but if history is anything to go by, i.e. his campaign so far in the race to the Presidency, then I would have to say no and I get this awful pit in my stomach.

Trump is getting away with all this because his supporters are not calling him on his BS.  I have watched person after person being interviewed and even when faced with video proof of the erroneous things he says they reject it out of hand not even acknowledging it OR scarier still they justify it.  To me it seems that they know that if they should admit to any one of his lies or statements of bigotry then the veneer that holds them together will crack and it will all fall apart.  Do yourself a favour and watch a clip or two of a Trump supporter being confronted.  An example would be a little old Grandma who looks like she smells like vanilla cookies; red-faced and hoarse from all the screaming at the rally is asked if she believes Trump is a Christian.  “Of course he is!  He is the biggest (to coin a Trump phrase) Christian there is!”  My goodness this thrice married man is the “biggest” Christian there is?  Beats me….  These people all have one thing in common. When confronted with facts about Trump’s deceptions and contradictions they all look like CP3O having a short-circuit as they search for something to say that will make him sound sane.

If Trump should be elected to the highest office in this world these followers are going to expect him to keep his promises i.e. build that wall!  In the words of Michelle Obama… oops I mean Melania Trump “His word is his bond.”

Then of course there is this whole thing with Hillary.  Some people don’t like her or trust her. There are those e-mails and the cover up…. Benghazi… What can we believe? That she will say anything to get elected?  She represents so much of the old school politician that the Millennial’s despise.   They are Bernie fans!

Hillary does not inspire as Bernie does.  She tries her best but she just isn’t as eloquent as Obama but she is capable and has the record to back up her claims that she can do the job. I have been watching Hillary valiantly trying to bring Bernie’s bright-eyed, tie-dyed idealists into the fold. I hope they go with her because what they don’t realize is that the US is not ready for the type of politician that Bernie Sanders is.  In forty years that ruler will rise from the very ranks of the young people who stood with him now, mark my words.  I hope I am still around to see that day.

Could we witness the rise of a fascist state?  I don’t know I would hope not but...  I watched Trump being asked some hard questions about abortion.  Regardless of your own moral personal views on the matter we have to think very carefully about banning it.  History taught us that doesn’t work and it puts many women at risk… backyard abortions will still happen.  What really concerned me though is that when the reporter eventually got him to respond to the question of the law should abortions be banned Trump finally conceded that he would recommend that the women be punished (jail time perhaps).  “What about the men?” the reporter asked. “Well… no.” was the reply.  This may seems small to some but I hear the suppression and vilifying of the Feminine.  What a shame that would be to take such a step back the very instant that the first woman in history is nominated to run for the Presidency of the United States.

On the bright side, often our worst fears are not realized.  It is quite possible that Trump, if elected will be hamstrung by Congress just as President Obama has been, and if Hillary gets elected nothing will change we will have four more years of quiet growth.

If the Democrats can’t get their act together we will be in for more than just a bumpy ride.  I feel sorry for the people of the US of A.  Depending which side of the political rhetoric you listen to their choice is between a villain and a demagogue.  Meanwhile fear is running rife as Trump fires up his jean clad, baseball cap wearing troops to take over the world….

Empaths – what are you doing in my space?

I know, I just pissed a lot of people off but I think it is a question that begs asking.  I am worn out by the expressed self-pity of empaths.  What is an empath anyway?  The dictionary says: “A person with the paranormal ability to apprehend the mental or emotional state of another individual.”

Really, did I give you permission to step into my circle and “feel” my mental or emotional state? I don’t think so!  Surely my thoughts, feelings and emotions are mine to feel and own and not to be randomly high jacked by another.  What really annoys me on top of it all is that the empath will then take my angst or fears as their own; take it on and wear it like a cloak, all the time bemoaning how horrid it is to feel other people’s stuff.  Well enough then – DON’T!  I have not given you permission in the first place!

Let’s get one thing straight, this is not a paranormal ability.  Every person I know has the ability to feel what another is feeling and feel empathy for another.  Some choose not to use their ability at all and remain quietly asleep. Others don’t give a damn and disregard everyone’s feelings but their own.  That doesn’t mean they can’t, they just don’t want to.  Perhaps sociopaths and psychopaths feel nothing at all – but they are not most people, then again one could argue that they feel everything and that it is exactly this ability that makes them such skilled manipulators.

Most people will feel empathy for others when faced with their sadness or grief, this is normal.  So what is the difference you ask?  The difference is that most people will not be so presumptive as to tell you that they can feel your feelings better than you can.

Empaths that can’t go to busy places with a lot of people, or the one crying in a crowd… you need to find a way to ground yourself.  Perhaps look at ways that you can protect yourself from the onslaught of other people’s feelings.  I know it must be very confusing and chaotic.  Do you feel it makes you special and different and is this feeling of "specialness" stopping you from holding your space? Is there a different way your gift can be applied where you don’t have to be crushed by all that is going on around you? If as you say it is such a burden to bear it might be time to find a way to tone it down.  There really is no need for you to absorb my feelings or anyone else’s.

Personally I feel deep empathy for people. Let me add that this has not always been so. It is only after my awakening and starting to heal that I have been able to open up enough.  As a person who works with people working on their personal growth it is a requirement.  However, I have their permission and it is in a safe controlled environment.  When I go out into the world, I go with an open heart but a protected Soul.  I keep my fibers to myself and don’t impose my luminosity, feelings or presence.  And I don’t want anyone doing that to me…